Fried Wontons – Part of Chinese tasty dumplings – are loved by many. This  homemade,simple,short taking time recipe –more or less half an hour- will  give you a yummy and crunchy fried wontons as the end result. You usually have fried wontons as an appetizer that wiil  arouse your appetite because of the delicious crunchy wrappers and the palatable wontons filling. 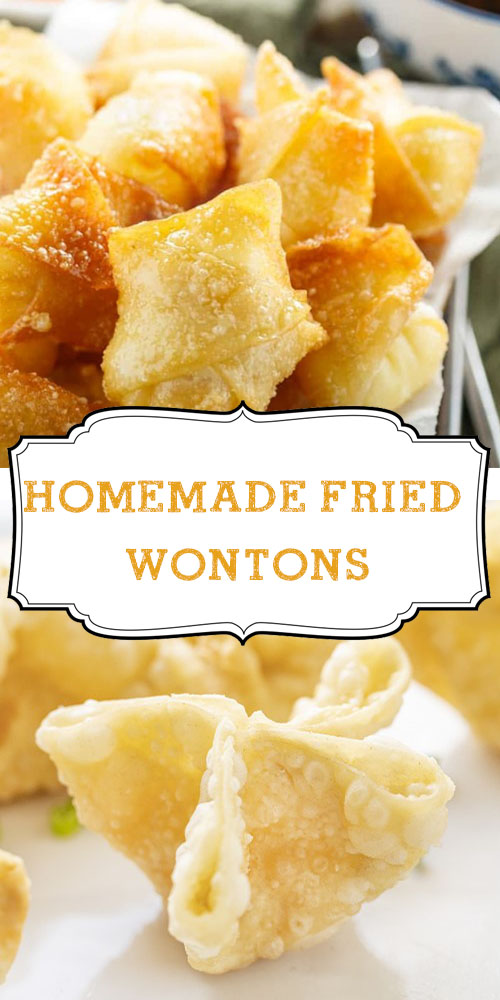 The interesting part of this homemade fried wonton recipe is when you start to make a wonton by placing the filling in the special wonton wrapper. But,nowadays,you can find and buy the factory-made and frozen varieties in the supermarkets,so you don’t need to face any difficulty in wrapping the wonton.

All you have to do is deep frying the frozen wonton using vegetable oil in a large frying pan. But again, it will be a nice experience  for you if you can make your own handmade Fried Wonton at home.

Wontons have a long history in Chinese Cuisines. It all started in Han dynasty. Nowadays, each region in China, like Canton, Sichuan, Shanghai and many others has its own special Wonton. In Cantonese cuisine,shrimp filled wonton with minced pork is a common one and in Sichuan cuisine,semi pentagonal wonton, known as “folded arms” are often served in a sesame oil paste and chili oil sauce as a dish called “ red oil wonton “ while in Shanghai cuisine,wontons have  two major types,small wontons and large wontons.And in Shanghai,there is one famous fast food chain which offers you more than 50 varieties of  wonton fillings.

Wonton, in Cantonese Language actually means ”cloud swallow” because when wontons are cooked, wontons float in the boullion like  small clouds. To make Wontons, you need a special wrapper. This special wrapper is made of flour, egg, water and salt. The most common filling are shrimp and ground pork. Wontons come in several different shapes. For examples, the simple right triangle,  a globular, or unevenly squashed shaped Wontons. Wontons are usually boiled, or deep fried, but you can also have wontons as a soup. What is usually found inside a wonton? A flavorous meat or delectable seafood filling is inside wonton and a yellow rectangular wrapper wraps the filling inside a wonton. Where is the yellow color from ? Yes, you are right! It’s from the eggyolk.

WHAT’S THE DIFFERENCE BETWEEN WONTONS AND DUMPLINGS?

WHAT IS FRIED WONTON?

This homemade and short taking time recipe will show you how easy it is to make the mouthwatering Chinese sweet and sour sauce and  a yummy, crunchy Fried Wonton. Well, there are at least two things you have to learn first to make a crunchy fried wonton. The first thing is the basic technique to wrap   a wonton and the second thing is to make the delicious Fried Wonton’s filling.For this yummy filling, you need a shrimp with ground pork and if you want to, you might want to add water chestnuts to give you a crispier texture. Later when you deep fry the Wonton, it is much better for you to use a neutral  cooking oil or just use the vegetable oil. Dry the remaining of the oil using paper towels after you deep fry the Wontons.

HOW MANY CALORIES DO YOU HAVE FOR FRIED  WONTONS PER SERVING?

Fried Wontons with this recipe has 311 calories per serving.

WHAT OTHER MEALS TO SERVE WITH FRIED WONTONS? 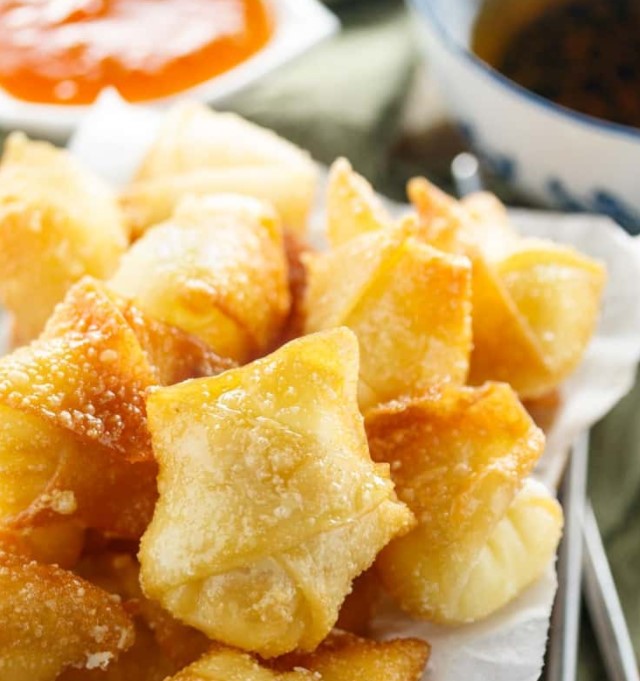 Some other Chinese meals such as Kung Pao Chicken,Chow Mein can be served for the Main Course after you have Fried Wontos as an Appetizer.