Garlic Noodles Recipe That Are Truly Simple and Easy to Make

Garlic Noodles Recipe That Are Truly Simple and Easy to Make

If Italy has spaghetti, Asia has noodles. And I really love Asian noodles with no reason. Countries in Asia have their own garlic noodles recipe. We’re sure not going to talk about all of those recipes. But what you’re about to see down here is the best recipe you must absolutely try for the upcoming dinner. This recipe will give you the most delicious noodle dish in less than thirty minutes.

When served alone, garlic noodles are going to make you feel better trough the umami taste it gives you. But it will taste even better with some complements. For example, you can consider cooking shrimp garlic noodles, parmesan garlic noodles, or brown butter garlic noodles. Though noodles come from china, every country in Asia now has different noodle dishes in various different tastes.

Based on the main ingredient used to make noodle dishes, there are various types.

Asian people have boiled noodles and the drained noodles that are combined together with many other ingredients before they are being baked. Casseroles are the most popular example of baked noodles.

Basic noodles are noodles that are cooked in broth or water and then being drained. You are free to add the other foods to the basic noodles. You can even add the boiled noodles into the other foods. Basic noodles can even be served in plain with dipping sauce on table. This kind of noodles come in soft texture and is able to absorb flavors.

The name of this noodle shows us that dishes made of this noodle would be served cold. Usually, chilled noodles are used in salad. For example, there cold udon from Japan and glass noodle salad from Thailand.

Fried noodles are used to make stir fried noodles with assorted seafood, meats, vegetables, or dairy products. Yakisoba from Japan, pad Thai from Thailand, mie goreng from Indonesia, and lo mein from china are some example of fried noodles.

This one is Asian noodle that’s served with broth. Some examples of this noodle is saimin, laksa, ramen, and also batchoy. Which noodle dish attracts you the most?

Steps That Lead You to Tastiest Garlic Noodles 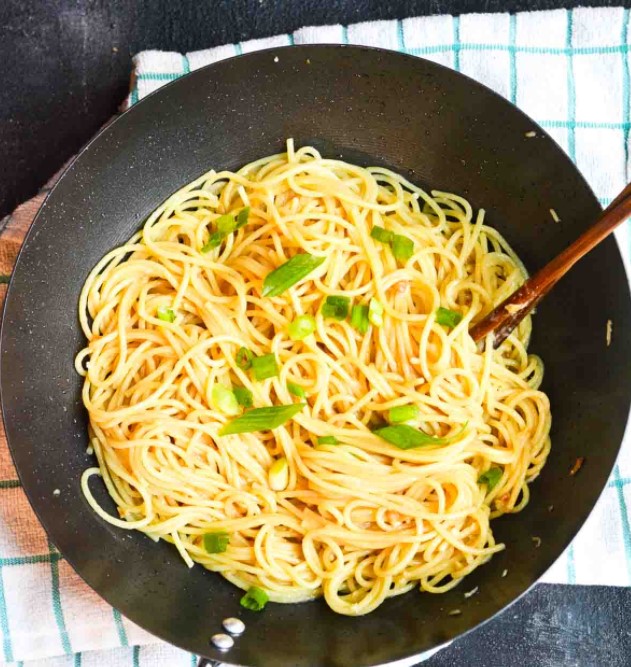 To make the garlic sauce, you need to prepare these ingredients:

Linguine or spaghetti are the best alternative to replace the yellow noodles for the garlic noodles recipe above. The noodles are tasty enough to be served alone. But you can make it tastier by serving the noodles with chicken wings that are cooked with honey soy, Asian butter shrimp, black pepper shrimp, or crispy sautéed brussels sprouts. Which side are you going to choose for your noodle?