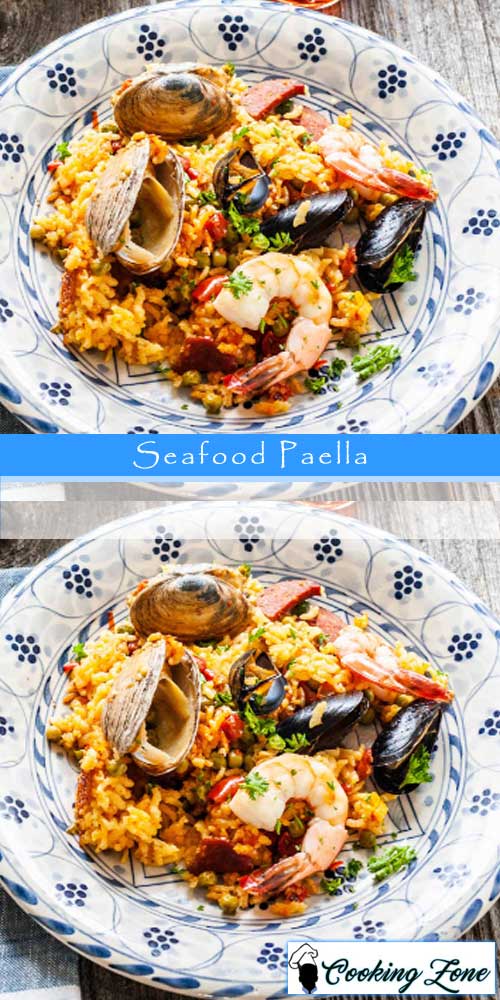 A festive occasion calls for a big statement, and this paella is just that a colorful rice dish bursting with clams, mussels and shrimp along with smoky chorizo and saffron for tons of flavor. You don’t need much else to serve alongside it, but you could make a green salad if you feel inspired.

Set the whole pan of paella on your picnic table, and bring out some crusty bread and wine glasses. Summer is just too short not to celebrate it with friends.

The origins of paella are ancient, rooted in the area around Valencia, Spain near the Albufera Lagoon, where both fishing and rice growing dominated the region for centuries.

Paella was the food of farm workers who cooked dishes of rice over wood fires, embellished with whatever ingredients they could find.

The dish is named for the wide, shallow pan in which the paella is cooked. The word “paella” is from a Valencian dialect meaning “pan,” probably derived from the Latin word “patella” for pan.

DO I NEED A PAELLA PAN?

While you can buy a paella pan and even a special outdoor paella grill for cooking it, it’s easy enough to adapt the traditional paella method to our home kitchens without a lot of extra fuss.

Since I don’t possess a paella pan, I used the largest sturdy skillet in my collection of pans. A cast iron pan would be ideal but mine was not big enough and I found my heavy skillet worked just fine. Lacking a large skillet, you could also use a medium-size roasting pan (approximately 14 X 10 inches).

HOW TO MAKE PAELLA AT HOME

Although you can cook paella entirely indoors on top of the stove, when you consider paella’s wood-fired origins, it makes total sense to cook it outside on the grill. For this recipe, I started it on the stove indoors while the grill heated, and then finished it on the grill. Even, steady, medium heat is the goal.

THE BASIC INGREDIENTS FOR MAKING PAELLA

Paella is the mother of all the one-pot meals, so it makes a supreme party dish. Improvisation rules the day, since even in Spain the issue of what ingredients should go in paella is hotly disputed, making it impossible for foreigners, let alone Spaniards, to dictate them strictly.

Sprinkle with parsley and bring the whole pan to the table for serving.

The Nice And Easy Clam Bake