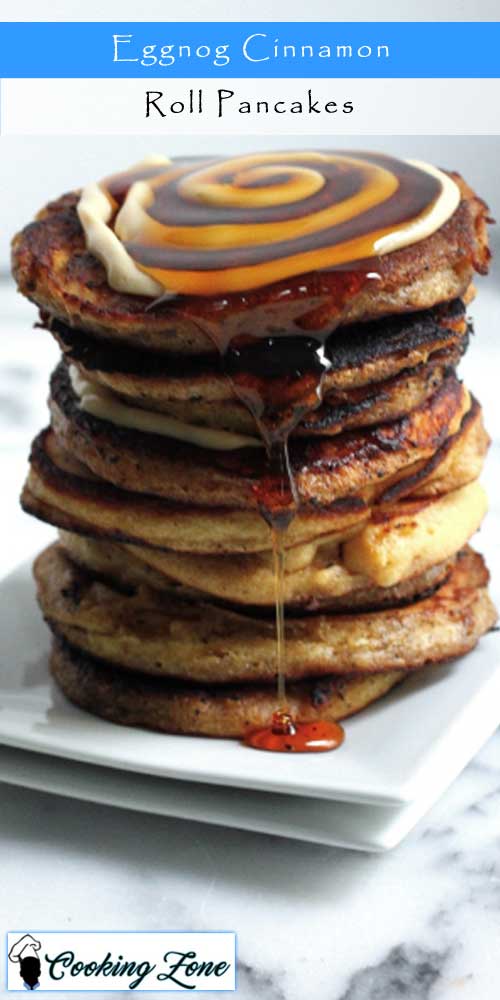 As the holidays creep closer and closer, all I can think about is Christmas morning breakfast. It’s kind of a big deal at our house, and this year, I’m in charge! Truthfully, I’m a little nervous because my fam is SUPER picky (yes, y’all really are!). But I’m also really excited. This is totally the kind of thing I can handle being the boss of. 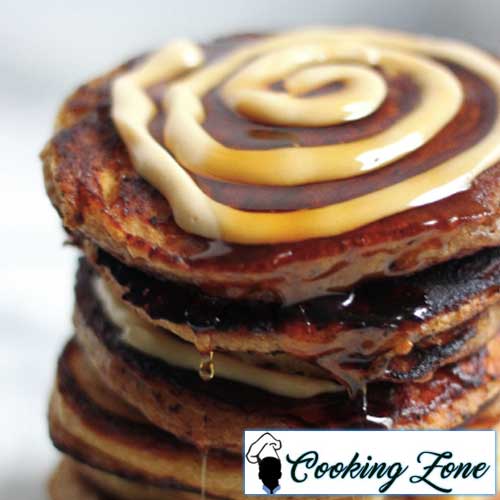 Let the awesomeness sink in a bit; I’ll wait.

You back? Cool. So, let’s chat about these beauties, eh?

Ok. How about the eggnog part? It plays the part milk/buttermilk normally does, and I must say it is a true star in its role. The nog adds moisture, yes. But flavor, too. Lots and lots of dreamy, creamy, dreamy flavor. Pardon the double dreamy… I just ate these pancakes like 5 minute ago so I’m kinda pancake whipped right now.

Moving on! To the cinnamon roll part, of course! I actually got the idea and inspiration to make these pancakes after I made (and fell deeply in love) with these eggnog cinnamon roll muffins. I figured, hey – if they made my life happy in muffin form, why not up the ante and transform the fabulous flavor combo into pancakes? I mean, is there a happier food out there than pancakes?

After a few trial runs, I finally found the perfect recipe. One that produces a light and fluffy eggnog flavored interior while also boasting a crispy cinnamon swirled exterior just begging to be drenched in a cream cheese drizzle. I mean, BOOM!

I hope you guys are having an awesome weekend! xo

For the Eggnog Pancakes

3 tablespoons butter, melted plus butter for the pan

For the Cinnamon Swirl

For the Cream Cheese Icing

For the eggnog pancakes & Cinnamon Swirl

In a large bowl mix the flour, sugar, baking powder, and salt.

In a small bowl whisk together the eggnog, eggs, 3 tablespoons of melted butter, and vanilla; add to flour mixture, whisking until smooth.

Melt 1 – 2 tablespoons of butter in a large skillet over medium heat. Ladle 1/4 cup of batter for each pancake into the hot pan. Cook pancakes for 2 to 3 minutes, or until tops are covered with bubbles and edges look cooked. Quickly swirl with cinnamon swirl mixture, then turn and cook on the other side for another 1 – 2 minutes. Repeat procedure with remaining batter, adding additional butter to the pan when needed.

For the Cream Cheese Icing

In a medium bowl, beat cream cheese and butter at medium-high speed with an electric mixer until smooth. Add eggnog and vanilla. Gradually beat in confectioners sugar and cinnamon, beating until well combined. Drizzle over pancakes.